… but not the global emergency sort

The cultural climate in relation to Wales and the Welsh language also seems to be warming, if this newspaper headline is anything to go by.

I’ve been aware of an increasing media focus* on Wales and Welsh in the last few months. Even before Wales qualified for the football World Cup.

This recent Radio 4 programme in the series One to One is only the latest. It explores what it means to be a Welsh person in England (Emma Garland), and English in Wales (Mike Parker).

that this sudden interest in Wales is a move to set against the growing interest in independence for Wales. 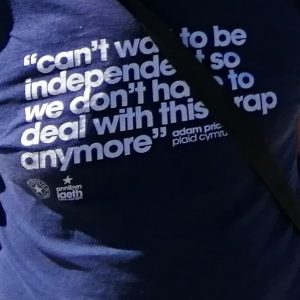 Is it a deliberate policy of trying to neutralise the feeling of being ignored/abandoned by Westminster?

my fervent hope is that BBC-listening, heavyweight-newspaper-reading and politics-following publishers will clock all this and think: ‘Yes, we think novel-reading people are ready for a gem of a story translated from Welsh. It’s not an oddity, it’s interesting. Let’s take a look at this Susan Walton and her translation of Yn y Tŷ Hwn from the Welsh.’

A little aside: if you are interested in the accelerating change in the earth’s climate (and who isn’t?) you might like to take a look at my other blog, where I post my original writing: ’Sgwennu Sue.

I’ve been writing the words: ‘Pan fydd yr holl iâ’n toddi, bydd y môr yn cyrraedd fan hyn’ and ‘When all the ice melts, the sea will be up to here’ over and over and over on Post-it notes. 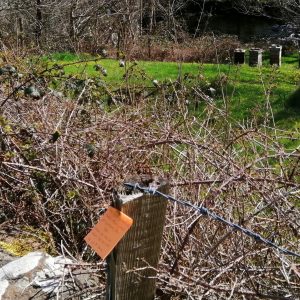 One of the Post-it notes

Starting to open up …

It’s now eighteen months since I finished my period of being mentored and when I finished the final version of This House, a translation into English of Yn y Tŷ Hwn by Sian Northey. Now, as covid repercussions diminish, some publishers are starting to open submission windows, and in-person cultural events are happening.

In early January, when I last posted on this blog, This House had already been rejected by publishers A–E, and was awaiting an outcome from publishers F and G. It was swiftly rejected by G, and the outcome from F is still unknown after six months, so I’m presuming it’s not wanted.

Over the next few months, I’m not going to wait for the outcome of one submission or query before making the next. This means multiple submissions and queryings – but my spreadsheet is my friend. Bids H, I and J have already been sent. 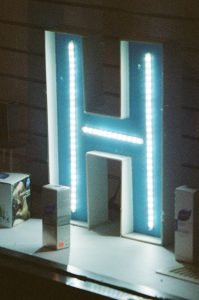 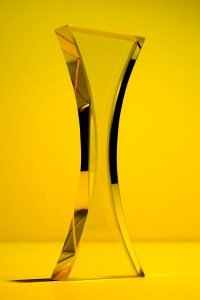 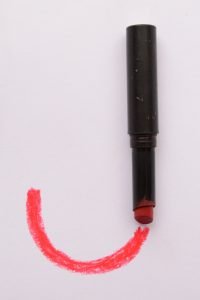 Raising awareness of the Books Council of Wales

The other new tactic is to make submissees aware of possible Books Council grants that are available to publishers.

It’s only recently dawned on me how ignorant publishers outside Wales are about these. Because many source countries whose literature is translated into English help with this process financially, I’d presumed that publishers would automatically assume the same thing would be true of Wales – not so, it seems.

Meanwhile, on the border …

I had rolled over a booking for two nights’ camping at Hay Festival since 2020, the year of being mentored. I decided to take the plunge this year, albeit without plunging into the enclosed performance spaces: I’m still being very cautious where I take my nose and windpipe. 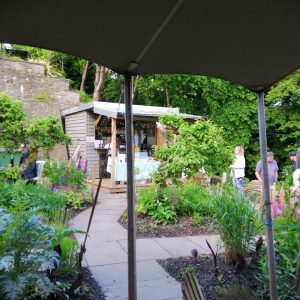 Garden at The Bean Box, Hay on Wye

Still, my main reason for going was to cruise and chat, and this I did – round the town and round the festival. And very interesting and enjoyable it was, especially watching an episode of Radio 3’s The Verb being recorded. Daniel Morden’s opening a – re-telling of the legendary origins of the bard Taliesin – was magnificent.

Whilst flâneuring about, I had the pleasure of running into one of my Sue Proof anchor clients. It was lovely to see her in person and have a chat over lunch. 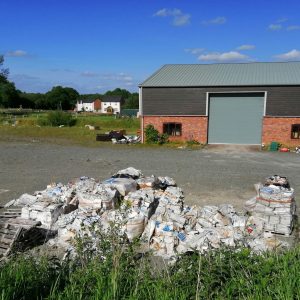 Dead books in Hay on Wye

The photo is of a commercial unit just next to the campsite I stayed on. It shows the other side of Hay. The campsite supervisor told me that these are dead books. This is the dark underbelly of ‘the town of books’: when Amazon divests itself of stock, it sells them to the warehouse chap. When he doesn’t sell them in Hay, this is how they end up.

My latest commissioned translation for the publishing house Gwasg Carreg Gwalch came out in the spring. It was chosen by the Books Council of Wales as one of its books of the month for May. That’s it in the front: Faster Than the Swords. 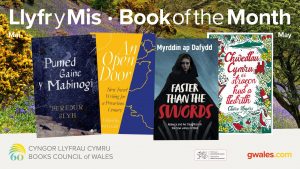 My next commissioned translation, Fleeing the Fascists, is almost done and will be coming out in September. This is the cover of the Welsh original, but the English will likely have the same design. 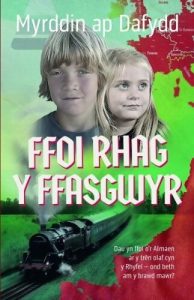 As well as the ‘One to One’ programme mentioned above, between February and June 2022 on BBC Radios 3, 4 and 6Music, I noticed:
—  Welsh comedian and national treasure Tudur Owen had a two-part dramatised story on Radio 4, and was a guest on both Start the Week and The News Quiz
—  a couple of months later, there was an entire Start the Week programme on the theme of Welsh identities
—  mention of St Dwynwen’s Day (the Welsh lovers’ day) was shoe-horned into a question in Counterpoint where Bryn Terfel happened to be singing the music in the question (but not in Welsh, nor was it Welsh music)
—  Katherine Stansfield’s poem ‘Beware Welsh Learners’ was on Poetry Please; it finishes with a line in Welsh: ‘Bore da, bore da.’ (Kath was, co-incidentally, one of the tutors on the course I attended at Tŷ Newydd)
—  there was a three-part series on Radio 4 from Jeremy Bowen called This Union: Being Welsh
—  Free Thinking on Radio 3 had an entire programme called ‘Speaking Welsh’
—  the 6Music Festival came from Cardiff this year, with Welsh being used as an equal language to English in the trailers for the event
—  Cerys Matthews presented a programme on Radio 4 called ‘Youth Unites’, celebrating the centenary of the Peace and Goodwill messages sent by the youth of Wales to the youth of the world by the Urdd Gobaith Cymru (oh, and guess what the topic is for 2022? –  the climate emergency)

On top of the i newspaper trumpeting Wales’ soccer achievements with its headline in Welsh, there have been these newspapery events:
—  The Sunday Times changed its style guide for naming our highest mountain – it’s now Welsh language first for Yr Wyddfa
—  to the bafflement of most of the UK press, Guto Harri, newly appointed Director of Communications for Boris Johnson, gave his first press interview to Golwg 360, which is a Welsh-language news website
—  the English translation of Manon Steffan Ros’ Welsh bestseller The Blue Book of Nebo was selected for inclusion in a list of children’s and YA books in The Guardian
—  The Bookseller recently devoted multiple spreads to the literary scene in Wales.

Words ©Susan Walton 2022. Photo of i newspaper ©Non Tudur, 2022. Photos of ‘can’t wait to be independent so we don’t have to deal with this crap anymore’ t-shirt, ‘when all the ice melts’ PostIt note, The Bean Box cafe in Hay on Wye, and dead books in Hay on Wye ©Susan Walton 2022. Photos of letter ‘H’ by Nikhil Mitra, letter ‘I’ by Michael Dziedzic, and letter ‘J’ by Zyanya BMO, all on Unsplash. Photo of Books Council of Wales books of the month from that organisation’s social media accounts. Video of the Urdd Gobaith Cymru’s Peace and Goodwill message from that organisation’s YouTube channel. Cover of Ffoi Rhag y Ffasgwyr ©Gwasg Carreg Gwalch, 2022.