On 27 November 2019, I received a phone call from Literature Wales telling me of my success in being awarded this:

New opportunity for 2020. One place on the Mentoring Scheme will be ring-fenced for an early career translator/writer, working on literary translation from Welsh to English OR English to Welsh.

I was so discombobulated I had to take the rest of the afternoon off work. I started a new notebook straight away. The first page reads:

New project – new notebook. Got to get stuff out of my head so I can carry on with my paid work. Disbelief – I genuinely thought it would go to a bright young thing. When can I tell Sian?

The question about when could I tell Sian Northey, ‘my’ author, turned into ‘when can I tell anyone at all?’ My award was supposed to be a secret until mid-January 2020. That was when Literature Wales was going to announce the beneficiaries of its bursaries and menteeships, all together.

I can now fully sympathise with anyone who’s been told they’re going to get an honour or an award, but can’t spill the beans. Christmas get-togethers (remember them?) last year were spent replying, ‘Oh, you know, the usual’ to enquiries about how my work was going.

What really I wanted to say –  or scream, possibly – was,  ‘Fantastically well! I’ve been recognised as an emerging literary translator, and I’m going to be mentored throughout 2020!’ Then everyone would have congratulated me and, with any luck, bought me a drink.

My problem comes in two parts. The first is that – in common with many languages – tenses in Welsh (my source language) don’t necessarily map tidily onto tenses in my target language, English. The second problem is that I’ve never been taught English grammar properly. I’m like a musician who plays by ear. 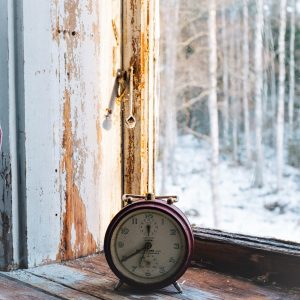 My mentor has suggested many tense changes to my translation of Yn y Tŷ Hwn. This is an example from the opening chapter; verbs are in bold.

In my first draft, I’d translated this passage:

She’d always been a gin woman. But a few months back, in the middle of her monthly shopping expedition to the supermarket, she was drawn to – for almost no reason – a bottle of expensive single malt. She justified the decision by reasoning that she’d probably drink less of something she didn’t especially like.

But before long she’d taken a liking to the golden liquid.

My mentor suggested this:

She’d always been a gin woman. But a few months back, in the middle of her monthly shopping expedition to the supermarket, she’d found herself – inexplicably – being drawn to a bottle of expensive single malt. She’d justified the decision by reasoning that she’d probably drink less of something she didn’t especially like.

But before long she was growing fond of the golden liquid.

And at present it reads:

She’d always been a gin woman. But a few months back, in the middle of her monthly shopping expedition to the supermarket, she’d found herself drawn – almost inexplicably – to a bottle of expensive single malt. She’d justified the decision by reasoning that she’d probably drink less of something she didn’t particularly like.

But before long she’d developed a taste for this golden liquid. 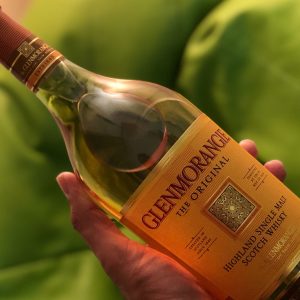 Is there a hack?

Well, perhaps not a hack, but at least some illumination. I turned to Editing Fiction at Sentence Level by Louise Harnby, a fellow member of the Chartered Institute of Editing and Proofreading (CIEP). 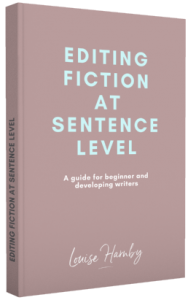 Louise is excellent on which past tenses are needed in fiction. Here’s an excerpt from her book:

When past tense flops – understanding past perfect

Less experienced writers can end up in a pickle when referencing
events that happened earlier than their novel’s now. The crucial
thing to remember is that when we set a novel in the past tense,
anything that happens in the story’s past will likely need the past
perfect, at least when the action is introduced.

Maybe that is what’ll be filling the Christmas get-together voids this year. 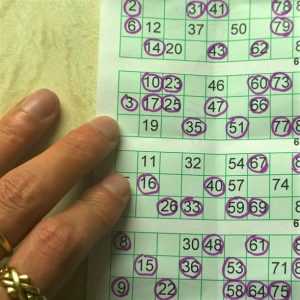 In readiness for our December meeting, my mentor has set me the task of writing a blurb for Yn y Tŷ Hwn that isn’t just a translation of the Welsh one, and that includes a quote relevant to one of the novel’s themes. I’ve never taken much notice of blurbs, so more discovery for me here. More literary fieldwork, so to speak.

Did you notice those novels in the main picture at the top of this post? I read all their blurbs. This is what my highly unrepresentative sample revealed about them:

Then I played blurb-bingo with words that cropped up repeatedly. The winning words were powerful, moving, scintillating, literary and love.

Here’s a sneak peek at my homework, before my mentor gets to see it; maybe it’s too long for a blurb at 140 words plus a quote. I quite like the micro-blurb bit (in bold), but I’m not convinced about the text quote. We’ll see what the mentor makes of it in December.

Anna has lived alone for decades. She is marooned in, and cocooned by, an isolated house called Nant yr Aur in the Welsh mountains. Her only constant friends are farmer Emyr and his wife, Dora.

The arrival of Siôn, a young man who seems strangely at home in Nant yr Aur, leads to an unpicking of Anna’s past.

She started to write a letter in her head to Siôn.

I had been expecting to see you before you left the other morning. I hope you will return to Nant yr Aur, because …’

She started to chew the end of the imaginary biro before resuming in her head.

‘… because your presence in Nant yr Aur felt right.’

As Anna’s relationship with Siôn develops, her perspective on the solidity of her past shifts. Uncertainty, distortion, illusion and subtle betrayal are gradually exposed. Ultimately, a quietly devastating revelation changes the lives of both of Siôn and Anna.

Sian Northey writes with economy and precision, setting out what the life of a middle-aged woman with an emotionally complicated past feels like from the inside. 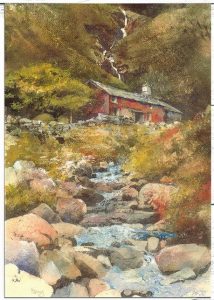 Oh, and while we’re on fantasy cover content, the watercolour of the red cottage is my choice of a front cover picture. It’s by fabulously talented landscape painter Rob Piercy.

Imagine the quote-strapline at the top – ‘By now there were new stars in existence, and their light had yet to reach Nant yr Aur’ – then, in big letters, the title ‘This House’. At the bottom, it should say ‘Sian Northey’ (of course), followed by ‘Translated by Susan Walton’.

I live in hope.