In my previous life as a geographer I had to do fieldwork of various sorts. Look at what was out there in the world – measure things, compare things, make notes, map things. That main picture is a light-hearted self-portrait, drawn when I was at college.

I finished the text of my translation of Yn y Tŷ Hwn to the best of my present ability in April, so I can’t progress with that until I start work with my mentor. They have been appointed. We have both signed a contract to work together but, because of their work commitments, they cannot start with me until June.

Here in Wales we’ve still been in a more restrictive lockdown during May than have some other parts of the UK. Some people have taken extreme measures to remind people of this disparity. 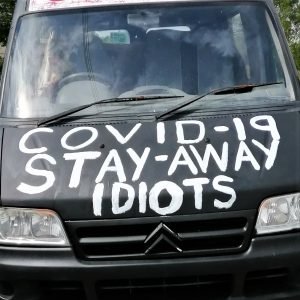 Nevertheless, tucked away in my house, away from covidiots, I’ve been free to conduct fieldwork in the landscape of literary translation. Comparing, noting, mapping. That’s what May’s mostly been about.

A Devil comes to Town 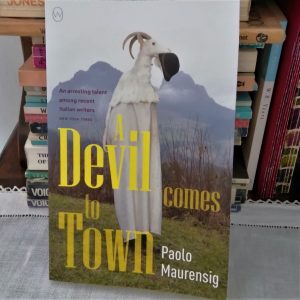 In March’s post I talked about coming across this novella on a charity stand in Wilkinson’s. On reading it, I noticed some words and expressions that struck me as peculiar in the English. This month I had the time to go and check out the first few pages in Italian, using Amazon’s ‘Look Inside’ function. Interesting.

For example:  ‘… since the publication of a fortuitous novel had afforded me a certain renown, I had become a pole of attraction for aspiring writers.’ Now I know this is quite formal language but nevertheless, to me, the natural way to express the end of this sentence would be: ‘ … I had become a magnet for aspiring writers.’ In the Italian original it is: ‘… da quando la pubblicazione di un fortunato romanzo mi aveva dato una certa notorietà, ero diventato il polo di attrazione per gli aspiranti scrittori.’ So it is, indeed, a ‘pole of attraction’. Noted. 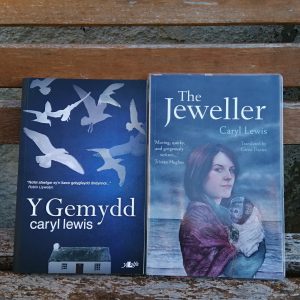 Also bought in March, but I only got round to reading it in May. I primarily read it in English, but with the Welsh original to hand so I could flick backwards and forwards to compare the two. This was an object lesson in a creative or loose translation. A new sort of literary landscape in which to wander and record the lie of the land. 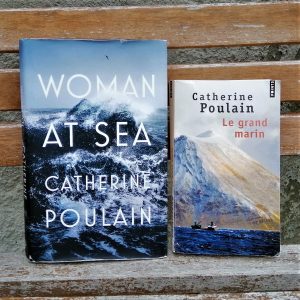 I discovered this via the Society of Authors’ YouTube channel. I started watching this panel discussion with three translators whose books had been shortlisted for the 2019 Translation Prize. The person who subsequently won the Translators Association First Translation Prize was on the panel. This is why I started watching. However, I ended up being more interested in another of the translators, Adriana Hunter, and the book she’d translated, Le grand marin. The English version was duly ordered from Abe Books and I loved it.

It’s set onshore and offshore in the world of commercial fishing boats working out of Kodiak, Alaska. It’s very impressionistic, and in both subject and treatment it’s like the documentary film Leviathan (don’t click the video of the trailer if you’re squeamish).

Oh she was a rare thing, fine as a bee’s wing
So fine that I might crush her where she lay
She was a lost child, she was running wild
She said “As long as there’s no price on love, I’ll stay
And you wouldn’t want me any other way”.

Aside from loving the novel as a novel, I noticed that it shifts between passages in the present continuous tense and in the past tense. In true fieldwork style, I tried to work out why.

I mapped the changes. Most of the continuous present parts are when Lili is at sea and fishing (which makes sense) and most of the past tense parts are ‘dead time’ when she’s not at sea. However, it’s not consistently so. Back to Abe Books to get the book in its original language. I wanted to see whether these changes are in the original or whether they are a function of the translation. I can’t read French properly, but I can  work out enough to see if the tense changes happen in the places I’ve mapped in the English. They do. I’m still slightly puzzled. Perhaps this is where the ‘fieldwork’ ends and ‘desk research’ starts.

While checking through the French text like this, I also noticed that the sections aren’t all spaced the same way as the English. I saw that there has been some creative editorialising in the translation too, as with The Jeweller. Maybe it’s more common than I think. Maybe I should have been more creative in my treatment of Yn y Tŷ Hwn. Well, I guess I’ll find out next month …