I have had my first public exposure for a piece of literary translation done off my own bat – and on the website of a prestigious literary journal at that!

Back in my January 2022 post I said I was going to submit my translation into English of a short story called ‘Eurgylch a meicroffon’ to literary magazines. It is from Cylchoedd, the latest  collection by Sian Northey. I called the story ‘Halo and Mic’ in English. I had in my sights two literary magazines: Trafika Europe and Asymptote. 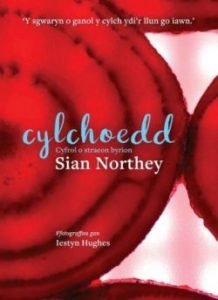 Sian Northey is also the author of the novel I translated during my period of being mentored as an emerging literary translator, Yn y Tŷ Hwn. It is the book for which I’m currently seeking a publisher; its English title is This House. Publication of one of her short stories would bring us both some exposure.

I heard nothing for two months after submitting to Trafika Europe. I then submitted the story to Asymptote – ‘the premier site for world literature in translation’, according to its own website. In June I was told it had been accepted for publication in the autumn.

More submissions of This House to publishers

Pitches for This House made earlier in 2022 to publishers H, I, J and K had already been politely rejected by two of them and  ghosted by the other two. Publisher F, to whom I’d submitted in 2021, eventually decided in June that they didn’t want to publish This House.

Because the publication of ‘Halo and Mic’ was going to be a useful enhancement when submitting This House to publishers, I decided to stop making any new submissions until I could point (virtually) to it, and go ‘Look! Look!’

Other attempts at exposure

I also tried another couple of tactics in 2022 to gain exposure. I entered the John Dryden Translation Competition. I didn’t even make the longlist.

However, I did make the longlist of publisher Louise Walters Books’ brilliantly conceived Page 100 Competition. The concept is simple: you send in page 100 of your unpublished manuscript. Page 100 of This House made the longlist, and you can read the winning and shortlisted entries here, along with Louise Walters’ commentaries on them. Louise is even going to email brief feedback on each of the long- and shortlisted entries – what a star!

In October I was contacted by Emyr Humphreys. He is being mentored to translate from Welsh to English as part of this year’s National Centre for Writing’s Emerging Translator Mentorships programme. Emyr is part this year’s equivalent of the group I joined for an industry weekend in January 2020. He’s trying to make links between Welsh-to-English literary translators.

The project for his menteeship is to translate the novel Y Dydd Olaf (‘the last day’) by Owain Owain (1929–93). This novel is considered something of a cult classic and, until recently, was out of print. It was republished in 2021 by Gwasg y Bwthyn. 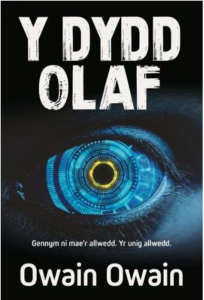 Co-incidentally, I had been reading Owain Owain’s short story collection Y Peiriant Pigmi (‘the pygmy machine’), looking for a Welsh short story to translate which didn’t reference Wales’ history, mythology or the rural landscape and way of life. In other words, rather like ‘Halo and Mic’, something out of time and place, something dependent wholly on imagination.

I hadn’t started on anything, but Emyr’s project prompted me to do so. Who knows – the reissue of Y Dydd Olaf, and Emyr’s translation, when published, might be the beginnings of an Owain Owain revival!

In Y Peiriant Pigmi I’d been taken with an extremely short story called ‘Gwyddau Gwylltion’, which means ‘wild geese’. It is so untethered from time and place that what’s going on is open to interpretation. However, the reader’s mental construction might be as (un)steady as what’s going on in the mind of the storyteller. It’s an intriguing story.

In contrast to the opacity of what’s happening in the story, the writing style is very carefully structured and very stylised and mannered. It could be regarded as a thousand-word prose poem. 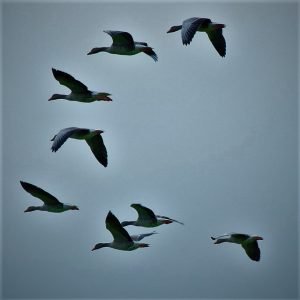 I’ve mostly translated living authors that I know, and it was odd not to have someone to say ‘What d’you think?’ ‘Are you happy with this?’ to. For this reason, I asked fellow translator Tim Gutteridge if he’d read over it, which he kindly did. His suggestions helped me revisit a few points, then it was ready to go.

I wanted Owain Owain’s estate to be aware of what I was planning, and to be happy with the translation. One of his children has a fairly public profile in Wales, so I contacted him and he acted as a bridge to the rest of the family.

They were all happy with the translation, and I received a lovely message from one member of the family saying that reading my translation had motivated them to re-read the original. Even if my translation of ‘Gwyddau Gwylltion’ never gets published, this message was personally so gratifying.

I submitted ‘Wild Geese’ to a literary magazine that places special emphasis on showcasing work by new or early-career writers. As yet, I have had no word about whether it’s going to be published or not.

Picking up on making submissions of This House, but this time with a published short story to point at

In the midst of being busy with ‘Wild Geese’, the ‘Halo and Mic’ short story appeared on the Asymptote blog’s Translation Tuesday thread. 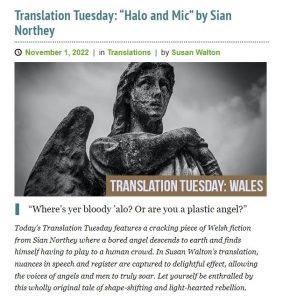 The story’s introduction includes the opinion that it is:

a cracking piece of Welsh fiction … In Susan Walton’s translation, nuances in speech and register are captured to delightful effect …

Even if pitched-to publishers only glance at the intro, the endorsement is there. Time to get busy …

I had seven publishers to approach. Publisher M, which I’d been tipped to try during my visit to Hay Festival, politely but swiftly rejected This House.

However, the next one on the list – publisher N – is considering us. At the time of writing, I’m holding off making further pitches until publisher N comes to a decision.

While all this was going on, my latest commissioned translation of a children’s/young adults’ novel came out: Fleeing the Fascists. It’s set in Wales and Germany before, during, and in the aftermath of, the Second World War. In researching the book, the author had made links with a journalist in Germany. He works for a daily paper in Bielefeld, the city where parts of the story are set.

When the English version came out, Markus Poch, the journalist, contacted Elke Klos, head of English at the Brackweder Gymnasium school in the city, and told her about the book. According to this article, Elke intends to read excerpts of Fleeing the Fascists with her English learners. More exposure, but in an unexpected arena – and what an honour to have one’s translation used to teach English! 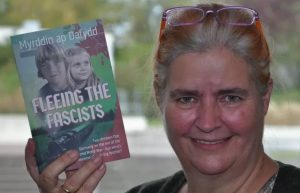 Another reason to be cheerful …

A recent Irish Times article had the headline:

Gains in translation for fiction readers and publishers

The article is by Fiona O’Connor of the University of Westminster, London and in it she says:

translation has become a disruptive innovation in what has been termed a monoglot and insular world – that of British publishing. … Shattering the 3 per cent translations rule holding sway for decades, UK and Irish sales of translated fiction grew to 5.63 per cent.

Hurrah for the disruptors!

Words ©Susan Walton 2023. Photos of man in a stream by Marvin Meyer, and wild geese by Manfred Antranias Zimmer are on Unsplash. Photo of the cover  of Cylchoedd is ©Gwasg y Bwthyn 2020 and of Y Dydd Olaf is ©Gwasg y Bwthyn 2021. The photo in the screenshot of the Asymptote blog appears to be by Pexels on Pixabay. The photo of Elke Klos is ©Markus Poch/Wesfalen-Blatt 2022.